This article about Friends of OASIS appeared in Stu News Newport on January 4, 2019.

The OASIS Senior Center, a city-run facility located at Fifth and Marguerite avenues in Corona del Mar, launched in 1977. Since then, it opened a state-of-the-art building eight years ago and has more than 15,000 seniors participating in activities each month. The Friends of OASIS group is a nonprofit with 4,500 members that provides volunteers and financial support. In July, Mike Zimmerman became the Friends’ president. 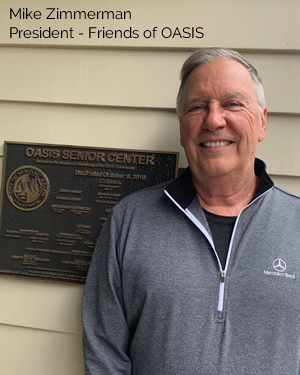 Q: You were recently appointed president of Friends of OASIS – what does that job involve?

A: Well, the job of president involves the running of our board of directors, which includes 21 members, as well as our executive board that meets once a month, which has seven members. We continually look for ways to increase our membership, bring financial support to OASIS and most importantly to bring our community of local seniors together. Money is important, certainly. Activities are important, certainly. But to bring the community together to work as one, whether it’s our rummage sale or whether it’s our annual Casino Night, or one of the many functions that we do, that’s equally as important.

Q: What is the thing that surprises most people about the OASIS Senior Center?

A: I think the facility itself is very impressive. Our gym and our 138 classes interest people. It’s funny. A lot of people are under the misconception that we’re walking around here with oxygen tanks, playing bingo and that could not be further from the truth. I also think every single person that I’ve taken through here, bar none, every single one, has left here going, “Oh my God, this is quite the place. I had no idea.” I also don’t think many people realize we also have an OASIS sailing club that includes two 36-foot Catalinas down on the Peninsula. That’s a big thing. We own those boats, we maintain those boats, we insure those boats. And those boats are the two most-used boats in the harbor. They go out every single day. It’s impressive. It’s fun and very cool. It is also a lot cheaper as any sailor knows than owning your own boat.

Q: Besides the new facility that opened a few years ago, how has the OASIS Center changed over the years?

A: We have grown up. This isn’t your Dad’s senior center anymore. We’re much more professional. We’re much more organized. We’re much more upscale and current. Along that same line, I think the demographics have changed dramatically from a much older senior citizen crowd to a much younger demographic in their 60s and 70s. Don’t forget, this is a 50-and-up club. When you walk people through here, show the gardens where you can rent a garden plot, that you can join a gym for a hundred bucks a year, that you can play bridge – we have so many things going on every day. There’s a lot of good stuff happening here.

Q: How are you drawing people in?

A: We have a meeting the first Friday of every month that we call a “gathering.” And we’re making our monthly gatherings much more production style. You should have seen the one we had recently about Pearl Harbor on December 7. We had two rehearsals, we had flag bearers and we had one of our professional singers singing the Army, Navy, Air Force and Marine songs, ending the medley with “God Bless America.” People were tearing up in the front. It was just perfect. I think some of those gatherings got rather stale, and we need to constantly upgrade our facilities and events. We have really upgraded and freshened up the entertainment, and Kathy Stewart, who was our past president, is now in charge of the entertainment, and she is the perfect person for the job. The food is now catered by upscale catering services throughout the city, and we honestly have great, great, food. It’s still only an eight dollar ticket a month for wonderful entertainment and lunch. We had a full house here last month. I think the more you upgrade things, the more people participate. We’re slowly, gently phasing out some of the older events and classes, and adapting to some new venues and surprises. I’m big on updating. We just got a new copier, new computers and we have a new Friends website that will blow your mind – www.friendsofoasis.org. We really made an effort to start fresh with new photos, and a lot of options like donating and registering for your membership, an updated calendar, and now we have a YouTube channel, where you can see yourself and your friends at some of our events. We have a Facebook page for Friends of OASIS, which we never had before.

Q: What are the biggest events planned for 2019?

A: On January 12, we’re doing a bridge tournament that we’ve never done, and on February 2 we’re holding an inaugural car show, called OASIS Cars and Coffee, complete with judging and some beautiful trophies. The car show is a take on Jerry Seinfeld’s “Comedians in Cars Getting Coffee.” We have enough room for 40 or 50 cars, and a dozen or so motorcycles. It’s for everybody. If someone is 30 years old and has an awesome car, bring it on down. We’ll love it. We will also have our two big fundraisers. Our spring fundraiser called “Ole Ole Fiesta Fantastica!” takes places in April. Our fall fundraiser is the rummage sale. Both of which make great money, but more importantly, they bring the community together to work with one another as a team...where we get to know each other better.